Sultan Says: A Travel Guide to the Perfect Weekend in Istanbul

Istanbul is truly a tale of two cities.

This isn’t just limited to a geographic context, given the city straddles two continents as a cosmopolitan gateway between Europe and Asia, but can also be taken in context of its current cultural renaissance as a global hub for fashion, film and food. While there is also a negative context to this argument given the contrast of how the current Turkish government and its conservative policies are starkly in opposition to the very liberal culture and spirit that flows through the streets of Istanbul and its locals, this tension is rarely felt.

Istanbul is more than having a moment, and if you want any more proof, one should look at the seismic momentum its thriving art and food scene has had in the past 5 years. Protests and government crackdowns be damned: Istanbul and its vibrant, diverse and downright friendly locals are forging ahead. If you want further evidence of how magnetic the energy is, look beyond the political headlines and more toward other stamps of approval such as the recent launch of Mercedes – Benz Fashion Week Istanbul, or elite hospitality juggernaut Soho House Group launching their latest members outpost in the city (more on that below).

Walking the cobblestone streets of Beyoğlu, with the Hagia Sophia in the distance

If you haven’t picked up on it already, I fully endorse Istanbul as a MUST travel destination; especially if you’re looking to fill gaps in your summer itinerary. If you’ve been riding the fence on whether or not to visit because of safety concerns, let me be the first to say, don’t believe the hype. Beyond just being a bastion of rich history and design, you would be hard pressed to not find something to cater to your interests.

Istanbul has something to offer everyone. From foodies, fashionistas, design enthusiasts, history buffs or travel junkies, the city is more of a place of a thousand faces and assets. As I can attest to, while you’ll never get it all done in just a quick jaunt over a holiday weekend.  It always helps to have a style guide to navigate a city as dynamic, vast and dripping with culture as Istanbul. Overwhelmed?

Have no fear, FashFoodies is here.

The inside of legendary Turkish deli Namli Gurme, packed full of sweets and other Turkish treats.

One thing you must understand before going to Istanbul is that the food and cuisines is so much more than Baklava and Kebabs. While both are essentials during a visit, there are other mandatory indulgences that are musts. From starting the day with a proper Turkish breakfast, full of eggs, bread with honey and fig, vegetables, and an assortment of cheeses, to sipping native Turkish spirit Rakı while dining on an assortment of meze (the Turkish response to tapas), Istanbul’s culinary cup overfloweth.

While there’s literally thousands of options to choose from, your dining itinerary should be balance a mix of traditional Turkish fare and modern takes on the classics. Remember the following:

A breakfast of champions served up at the legendary Namli Gurme in Istanbul.

A staple of Turkish cuisine, find a fish house and cool off with some chilled sea bass like this dish we sampled at Sultanahmet Fish House.

Yoghurt covering dumplings, one of many winning creations from chef Civan Er.

An assortment of fresh meze at Ciya, including lamb, rice and a spinach and paprika salad.

The sun sets over the Bosphorus as it crosses over Asia and Europe.

High above Beyoğlu: Mikla shines 20 stories above Istanbul with stunning views and a twist on Turkish tapas and cocktails.

The outside exterior of Soho House Istanbul, housed the former U.S. Consulate building.

It seems a proven litmus test of validating a city’s cultural kudos is receiving a seal of approval from hospitality maestro and Soho House founder Nick jones. With the recent opening of the members club for creative types 13th outpost in Istanbul, Jones once again shows his uncanny eye for an emerging arts scene, and only furthers his reputation for being one-step ahead of the rest. 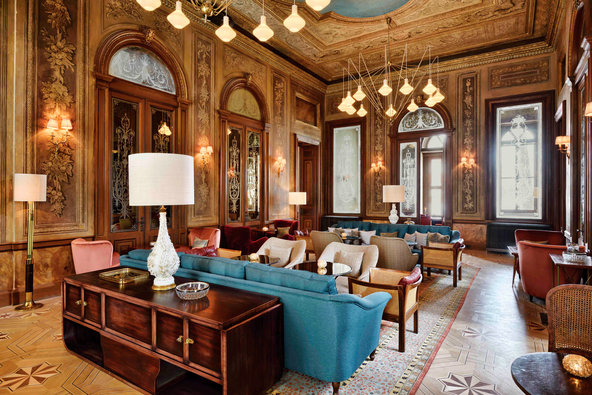 Soho House Istanbul is nothing short of a showstopper. Located in Beyoğlu on Istanbul’s European side, the property is based in the former location of the U.S. Consulate. Once inside, the aesthetic is stunning, if not jaw dropping with centuries old frescos topping the ceilings and custom Turkish iron statues adorning staircases. True to the tradition of other properties Jones has selected, he honors the timeless fixtures and structure of the building by upgrading and restoring them; not completely overhauling or trying to modernize them.

One of the 16th century frescos that adorn the ceilings of the property.

If the inside common areas with their authentic Ottoman interiors aren’t impressive enough, you’ should be equally amazed with the gorgeous, cozy interiors of the rooms. I stayed in what the hotel considers a “tiny” room, but it was more than enough for 1-2 people, and complete with essential Soho House touches like  oversized, sinfully comfortable beds, mid-century modern furniture and a bevy of complimentary Cowshed products.

Sophisticated yet simple touches make the rooms at Soho House Istanbul a cosy escape from the hustle and bustle of everyday Istanbul.

If you need any further convincing, head to the rooftop pool (a second opening soon on the hotel side of the property) for jaw-dropping panoramic views of all of Istanbul are worth the stay alone. For added effect, come at sunset to end your day watching the sunset over the Bosphorus with a Turkish Daisy cocktail in hand. Whether catching rays or just taking in the view,  the property continues a Soho House tradition of having a rooftop pool and city views as a crowning jewel of the hospitality experience.

Factor is several menus providing a fresh take on Turkish cuisine staples and accentuating a modern take on traditional meze, and staying at Soho House Istanbul is not just essential because of its central location, reputation, value and overabundance of amenities, but because it oozes character which honours its host city in impeccable, contemporary fashion.

Inside of Minimuzikhol, a preferred, exclusve late night spot among Istanbul’s creative types and club kids.

Forget any misconceptions and presumptions you might have about Istanbul being a victim of traditional, conservative culture.

Istanbul and its vibrant locals come alive at night.

Whether you’re in the mood to wind down an evening with a sunset cocktail on a rooftop lounge or getting turnt up at a nightclub based in an apartment building (see below), Istanbul brings the noise.

A collection of custom Turkish lamps on display in Istanbul at the Grand Bazaar, the world’s largest indoor market.

Sinan’s Spa: the slick interiors of Kılıç Ali Paşa Hamamı, one of Istanbul’s most famous hamams.

All of the cultural immersion and absorption can be exhausting, and should remind you that when in Istanbul, you have to Hamam.

While not all Hamams are created equal, Istanbul has a diverse array of options to refresh and recharge your batteries. With some being centuries old, there’s plenty of Hamams dotting the city if you’re looking for something local, authentic and charming. However, if you want to go the more spa-like route and opt for a bit more elegance (if not extravagance) to your Hamam experience, there’s ample of amount of those venues too.

How you Hamam: A shot of the marble slab steam room inside Cağaloğlu Hamamı, an example of centuries old decadence and indulgance.

What Else You Need to Know

Happy travels to all FashFoodies this summer, and wherever you go, make sure you’re doing it in style.

After looking at myself at a couple photos recently, I kinda gasped! Why are my hips so massive! And we all know, they don't...
Copyright © 2013 FashFoodies. All Rights Reserved
Back to top